It’s Friday, money nerds, and that means…politics! Wait. Are those two really connected? Probably not. But they are today.

At my main site, I steer clear of mixing money and politics. I want to write for everyone regardless their political persuasion. That said, I recognize that sometimes politics and personal finance are hopelessly intertwined. Today’s featured articles here at Apex Money prove that point.

First up, here’s a long, thoughtful article that doesn’t mince words. The author believes people like me are naive and creating false dichotomies:

Personal finance and politics. [Optimize Your Life] — “A conversation about money without discussing politics is only developing part of the picture. If we, as personal finance writers, really want to help our readers, we should be giving them the full picture and the full suite of tools to take control of their money and their lives.”

America’s growing political divide: 1994-2017. [Visual Capitalist] — “Politics can be a hot button topic in America. With rising tensions on both sides of the political spectrum, some claim that bipartisanship is dead. Recent research shows that may well be true. Today’s charts come from a report by the independent think tank Pew Research on the partisan divide between the two major U.S. political parties, Democrats and Republicans.” 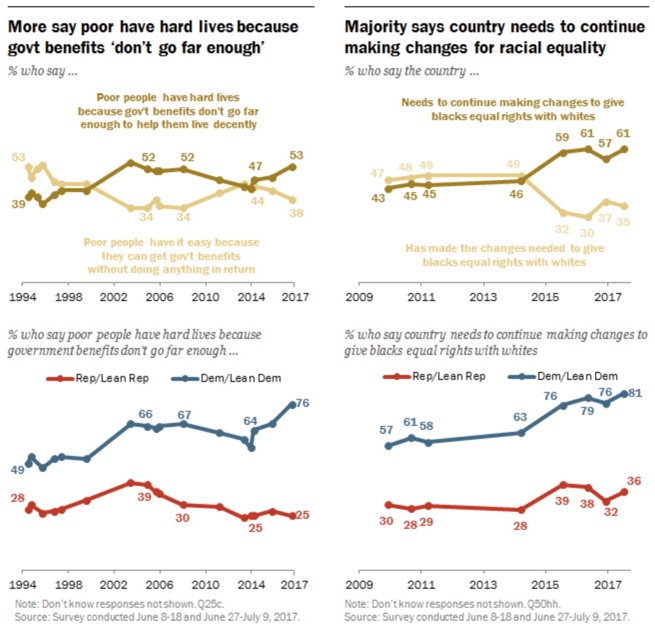 What I learned growing up in rural America. [The Guardian] — “In college, I began to understand the depth of the rift that is economic inequality. Roughly speaking, on one side of the rift was the place I was from – laborers, workers, people filled with distrust for the systems that had been ignoring and even spurning them for a couple decades. On the other side were the people who run those systems – basically, people with college funds who end up living in cities or moving to one of the expensive coasts.”

Shopping has become a political act. Here’s how it happened. [Vox] — “Where and how we spend our money does matter. But how much it matters depends on what else we do with our money and what governments and corporations do with their (considerably larger) pots.”

Found something you think your fellow nerds might like? You should send it in! Help spread the top money stories on the web here at Apex Money.